This is a guest post on Baby Led Weaning by ChocOrangeCityMum from http://chocorangecitymum.blogspot.com/ – Thanks hon x

I started weaning my son at 25 weeks, just before the recommended six months, because he was getting frustrated after a milk feed. For a few days spoonfuls of baby porridge and pureed pear went down a storm and I revelled in sharing this exciting new taste and texture experience with him. After a couple of days though, he started to scream whenever I tried to feed him causing us both to get very frustrated and upset. A few meals like this and I decided that I didn’t want to cause him stress towards food and so I would wait a few more weeks before we tried food again. 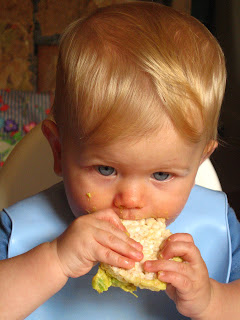 Whilst I had heard of and thought BLW was a good idea, being a big believer in making children independent beings, I was never quite comfortable with the thought that he might not be satisfied and might not get it. The Boy, however, had quite a different opinion and I never did get to “try” weaning again as one day, shortly after his six month birthday, he picked up a piece of naan bread and started sucking like his life depended on it. From then on finger food was all I could think of – toast, pitta bread and hummus, steamed veg, bananas, pears, cheese – and the Boy was so happy sitting there gumming away on a variety of foods. It was a very time consuming process with mealtimes taking an hour or more (which is quite a long time when you consider he was only awake for 9 hours a day!) but the experience was one I wouldn’t have rushed for anything. Watching him try new things and make bizarre combinations like sardines and strawberries, which would test even the most experimental palate, was something I looked forward to everyday. 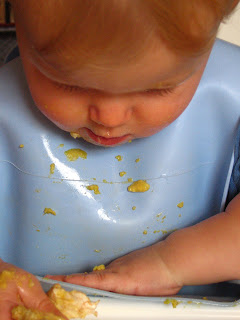 I hope I am not the only parent who also threw in the odd lemon or spring onion to gauge an interesting reaction – lemon was a highly amusing screwed up face before demanding more and he happily chewed away on the whole spring onion. He ate everything that was given to him and I was so happy that my gorgeous baby was sharing in something I so enjoy. There were times when he did want me to spoon feed him and I slowly but surely learnt to read his cues as to how and when he wanted his food, which has led me to my new and improved definition of True Baby Led Weaning.

Breastfeeding from baby and beyond

Had a lovely walk around Tutbury this morning. Vis