Review
We were sent the Skylanders Spyros Adventure starter pack to review recently. I have to be honest and say when I accepted I didn’t have a clue what kind of game it was, I used to play Sypro on the Game Cube when Lero was little so thought it would be similar to that! How wrong could I be! I’ve never seen a game that came with it’s own portal and figures before, Boo was totally amazed and Lero well he just shrugged;  But soon went about setting it up for him and his sister to play on. It does say 7 and over on the box but I have let Boo play on it, she’s not really into games consoles that much so the novelty soon wore off when it got tricky. Lero probably a bit too old for it 😉 has been having hours of fun on it! lol 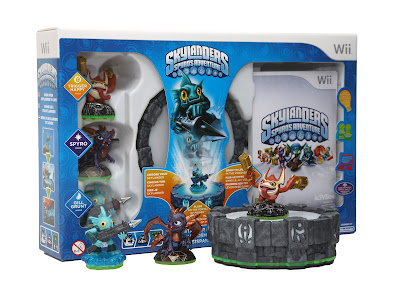 To be honest with you I would never buy a game like this where you have to buy extras to get the full potential out of the game. The starter pack is £37.91 on Amazon and then there are over 30 Skylanders to collect and they cost about £8+ each – It would get so expensive! Having said that it is a really great game and Lero has played with it for hours with the 4 characters that we have so I think we will be buying more! The levels are quite easy and  would definitely suit a 7-11 year old best. One thing I don’t like it that the portal needs 3 AA batteries which if played regularly do not last long so be prepared for that! Boo found it really exciting putting her Skylander on the portal and watching it come to life – on the screen obviously 😉
If your child is into this type of game then I would defiantly say it is worth buying, it’s a really well thought out game which will give hours of enjoyment. It might be a good idea to buy for a Christmas present and then if anyone else asks what they would like you can ask them if they’d mind getting a Skylander character :O) 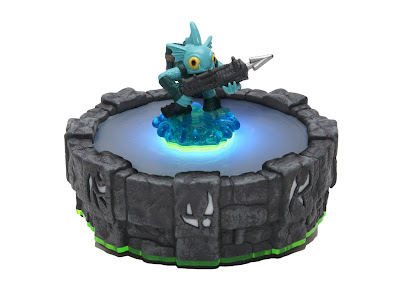 PRODUCT DESCRIPTION:
In Skylanders Spyro’s Adventure, you can ‘Bring Your Toys to Life’ in a boldly innovative adventure game where players collect real-world interaction figures and transport them directly into the game using a mystical Portal of Power™.
Propelled by a story-driven adventure, penned by Academy Award-nominated Toy Story feature film writers, Joel Cohen and Alec Sokolow, players take on the role of a powerful Portal Master who can control over 30 different characters, including the beloved fire-breathing dragon Spyro.  Players will embark on a fantastical journey into an amazing world, where they will explore mysterious, mythical lands, battle menacing outlandish creatures, collect gold and treasures, and solve interesting puzzles while on a quest to save their world from Kaos, an evil Portal Master.
Skylanders Spyro’s Adventure changes the way we look at toys and videogames, as well as how we interact with them by introducing action figures that become interaction figures and remember all of their dynamic experiences created in the game.  For the first time ever, players can personally customize and power-up their toys, as well as bring them to life on a friend’s Portal of Power for co-op play and player-versus-player arena battles. Additionally, with the freedom to change characters whenever they like, Skylanders Spyro’s Adventure allows kids to utilize different interaction figures and strategies each time they play. 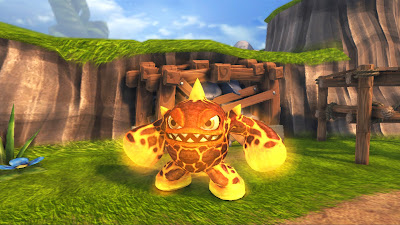 Interaction Figures – Skylanders Spyro’s Adventure offers over 30 characters to bring out the kid in everyone.  It’s all about choice, and each interaction figure has their own unique and expressive personality, powers and abilities which provide distinct advantages and skill sets for various levels, obstacles and enemies.

Toys with Brains – Each interaction figure contains a “brain” that remembers the player’s shared experiences and leveled-up abilities (e.g. stats, ability and attack upgrades, and gold collected) directly within each toy, This allows players to personally customize and power-up their characters, as well as take their interaction figures on-the-go to bring them to life on a friend’s ‘Portal of Power’ for co-op play and player-versus-player arena battles.

Categories, Strategy & Collectability – Interaction figures are classified by element types (Earth, Air, Fire, Water, Life, Undead, Magic, and Tech) and each has their own heroic challenges that are unlocked as more characters are collected.  Players can collect and then strategically select their favorite characters within the different element types to go up against certain enemies, obstacles, and puzzles as well as access new areas within the different levels of the game.

Exploration – As the tale unfolds, players will encounter a variety of vivid environments, each with its own unique look and feel, and each providing different challenges, puzzles, and the discovery of secret areas, rewards and mini-games.


Co-Operative Play – Players can join forces with friends and drop in and out of each level with as many different interaction figures as they like.  Different strategies can come into play as players can select their favorite characters to tag-team against certain obstacles, hazards and/or enemies within the different levels of the game.


Player vs. Player – A classic battle mode provides a selection of different game modes and arena maps for players to face off against each other. Each unique arena map contains a variety of obstacles, hazards and power-ups.  Players will want to make sure they build up their army of different characters and level them all up to battle their friends on equal ground.

For more information, be sure to visit the official Skylanders Spyro’s Adventure game website located at www.skylandersgame.com