Our Weaning Experience by Heather


I’ve been weaning JW for a few weeks now. We held him off as long as possible but it became clear that he needed more than milk. We had put him on hungry baby milk but he was still waking up in the night where previously he had slept through; he would scream at the end of every bottle for more milk yet when I tried increasing the quantity he was sick because his little tummy obviously couldn’t fit any more in!

﻿We won a weaning starter pack from Hipp Organic so we had everything we needed to start weaning. We started very slowly with just a bit of baby rice. Everyone warned me to expect the baby rice to be spat out – ha! JW wolfed it down! We just gave him one meal a day for the first couple of weeks & that seemed to go well.

﻿﻿After a couple of weeks we moved onto two meals a day. At this point he was leaving a lot of his milk as he wanted more food so we ended up dropping one of his bottles. I’ve been really worried about when I should or shouldn’t drop milk feeds but ultimately I’m allowing JW to guide me. Some days he wants more milk than others, and he always makes it clear what he wants!

I purchased a baby mouli & a silicone ice cube tray from Gourmet Kitchenware (find @Gourmetmummy on Twitter. They sell fab things & she’s lovely!) and I set about turning my kitchen into a baby food factory! I have to say that I really enjoy making purées. And although I’m happy to use jars of baby food from time to time (particularly when we’re out and about) they’re not a patch on the homemade stuff! JW is also not as keen on the jars as he likes a bit of texture to his food so I end up adding baby rice to them so they’re not so smooth.

I have tried giving JW the odd bit of finger food but so far he’s not really interested in holding it himself – although he will happily suck on a banana etc if I hold it to his mouth for him! Erm, excuse me Mr but Mummy is not your slave! He does, however, like to hold the spoon himself. He’s pretty good at getting it into his mouth but once there he tends to just chew the spoon rather than eat the food off it! I guess the rubber feels nice against his teeth & gums. I’ve tried using two spoons – one for him and one for me – to no avail. What happens is that he soon realises Mummy’s spoon has the food on it so he wants that one. Cue his spoon being thrown on the floor!

He does have a habit of grabbing a handful of food as it heads towards his mouth, and then shoving his fingers/thumb into his mouth along with the food. It creates some rather messy situations! I never realised that I would end up picking bits of carrot out of my son’s nose/eyebrows/ears!

I must admit that I was dreading the first time I’d have to feed him in public, and in fact I probably held back from giving him three meals a day for longer than I should have to avoid feeding him whilst out & about. But one day I ended up being out longer than I’d intended, and lo & behold somebody got hungry! So we stopped in a coffee shop & out came the bib, the beaker of water, the spoons and the jar of baby food and out went my fear. He was as good as gold and nobody stopped to tell me off for how messy he was! (and even if they had, so what? My son needed feeding!) It was best done that way because I hadn’t planned to give him dinner whilst we were out so I didn’t have time to get myself into a flap about it! It was whilst I was feeding him that day that it really hit me how fast my baby boy is growing up. Seeing him sitting in a highchair, eating proper food & drinking water from a beaker he looked so big! 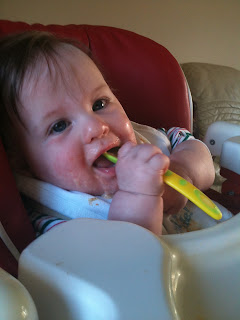 So now JW has three meals a day & a wide variety of food. So far there isn’t anything he’s rejected! I offer him water with each meal and sometimes he wants a bit of milk too. I’m loving watching him try new tastes and textures. I was very nervous about weaning to start with, but looking back I’ve no idea why. It’s a fun process & I’m just being guided by the boy. 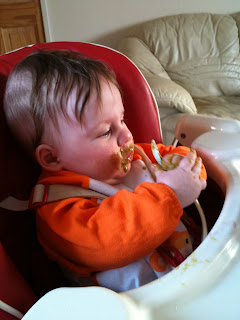 ﻿One month on: JW is 7 months old now. He eats three meals a day and he’ll eat ANYTHING! I’m still loving making meals for him, my kitchen has become a baby food factory! He has 3 or 4 bottles of milk a day – one with breakfast, one mid-afternoon & one at bedtime. Occasionally he’ll have a bottle mid-morning too. JW has water with his lunch & dinner. He’s also started to have a bit of finger food – toast is his favourite so far. I’ve also started to introduce a bit more texture to his meals. All in all weaning is going brilliantly and I love seeing him eat so well.
﻿

Had a lovely walk around Tutbury this morning. Vis