Cara Sayer the inventor of the fabulous Snoozeshade is my mumpreneur feature today!

Who are you?
I’m Cara Sayer, 39 (gulp) married with one gorgeous 3 year old daughter. I live in Surrey.

What do you do?
Back in October 2009, I took a prototype of my first product SnoozeShade Original, which is a blackout blind for prams and pushchairs, to a trade show to see if there might be a market for it with retailers.  The response was overwhelmingly positive and I was hurled into a rush to get product out into the shops to fulfil orders.
I created Really Simple Ideas, the parent company for the brand SnoozeShade, in December 2009. It manufactures the SnoozeShade range of products (which is steadily increasing) and works with distributors around the world to market them.
SnoozeShade Original is the version for prams and pushchairs and I have a new product for infant car seats launching in March with another four products in the pipeline.  In the long term I’d like to see SnoozeShade grow into a worldwide brand with lots of happy babies and parents reaping the benefits of using the products 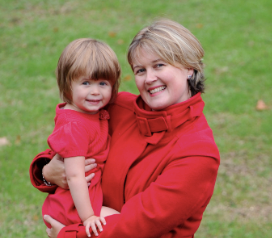 When did you establish your business?
October 2009

What made you start your own business?
Simply put – necessity. My daughter was a great sleeper as a baby but, as she got older and more aware of her surroundings, she started to find it hard to switch off at nap time. Like many parents, I tried to use a sunshade but she could see out. Then I used blankets draped over the front, which would be pulled or blown off. I looked for a suitable product everywhere and when I couldn’t find one I started to think about how I could make one.
I asked around, generally amongst other parents and there was a consensus that a product like SnoozeShade would be useful especially if it was priced competitively. I did do a lot of research. I looked at all products that could be considered competitors, investigated retailers and looked hard at the pricing. I wanted to keep it under £20 and in fact initially I wanted to do it for under £15 but just couldn’t afford to do it. I researched all the intellectual property rights issues I needed to address and then spoke to lots of people about the idea. The overall opinion was it could work!
My first big breakthrough came very early, when I exhibited my unfinished prototype at the Baby Product Association Show in October 2009.  I had an order placed by JoJo Maman Bebe on the spot. From then on I knew the idea had commercial legs it was just a matter of starting the ball rolling and keeping up with demand. 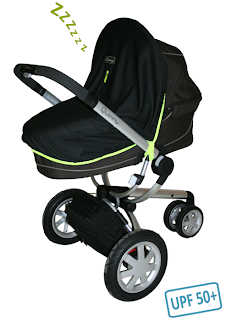 What do you love about working for yourself?
I have always wanted to be my own boss but always thought I’d start my own marketing or events business which is where my experience lay. I never expected to be an inventor. I’d never manufactured a product before or been involved in manufacture or retail so I had to learn everything from scratch.
Growth has been phenomenal and unexpected. I aimed to sell 7,500 SnoozeShades in the first year, as that would be 1% of the babies born annually in the UK. I’ve beaten that already. I attended an international trade fair in Germany in September and since then SnoozeShade has gone live in Australia, New Zealand, The Gulf, Denmark and more than ten countries are in progress at the moment.  I have also appointed a fantastic UK distributor and this year we go into 300+ Tesco stores, Mothercare’s top 86 stores and retailers including Boots and ShopDirect (Very, Littlewoods and Kays) are live now.
In mid-January I attended a celebrity two-day event pre-Golden Globes in Los Angeles to soft launch in the States. So I do get to mix a little work and play!

Is there anything you would go back and do differently if you could?
It has been very hard starting up a business, particularly as the business took off so fast. My largest challenge was when I came to a grinding halt at the end of June and suffered from nervous exhaustion. I collapsed from working too hard, working too much and trying to be perfect businesswoman, wife and mother.
Fortunately my mother and husband helped and gave me time to recuperate and I try (but don’t always succeed) now not to do so much. My daughter now attends a nursery to give me quality work time, but I have always benefited from fantastic family support.
I think if I could do it again, I would increase the amount of time my daughter was in nursery. If I’d been working full time she would have been there anyway and I think I got very pulled and suffered with a lot of guilt by having her around and trying to work. 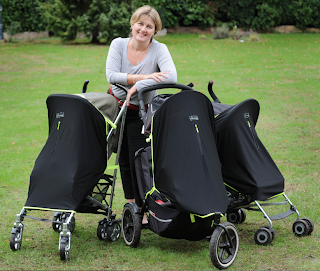 Finally If there is 1 thing that you could tell other Mums who want to start there own business; what would it be?
There are two pieces of advice
1. Go for it! My biggest piece of advice is just keep knocking on doors of people who’ve done or are doing the same as you. So many people gave me lots of free advice from their own experience. I now do the same with people who approach me. They might as well benefit from my mistakes and key learnings.
2. You might be a small business but act like a big one.  A lot of larger companies are too cumbersome to move as quickly as a smaller enterprise, use that speed to trip them up and stand out from the crowd. Most importantly – do your research!

Cara has kindly offered a Discount code – use 10FREE if they buy direct from www.snoozeshade.com – they save 10% and get free delivery taking it to £17.99 delivered. Thanks Cara :O)