Guest review
Hi, It’s Dawnie Brown here, Sonia’s sister and also guest reviewer 🙂 You can also find me over my personal blog Knees Up Mother Brown (Excuse the shameless plug for my own blog 😉 ) Now Zara has only just reached one year old but she is already proving to be a bit of a diva about certain things. I like to think it’s just because she is strong minded and independent like her mum but I wasn’t expecting the tantrums to kick in for at least another year. 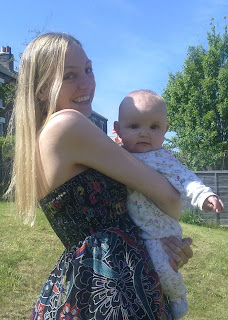 When I was sent this CD to review I was most intrigued to see whether it would help at all, not all the songs are particularly relevant to us at the moment as it’s still early days in the tantrum department at our house but two particular issues we have are nappy changes and brushing teeth and so these songs were the ones I went straight for when the CD arrived. 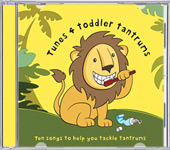 This CD should come with a warning as the songs will get stuck in your head and you will find yourself humming them to yourself all day long, I admit finding myself walking the corridors of work singing the nappy song…
Nappy Time!
Ask your child to pretend to be a wriggly beetle on his back with his legs up in the air. Try it with him to make him laugh. Sing the song whilst changing his nappy. In the middle section stop for a moment and have a good tickle. For the other verses ask him if he can stretch his legs up to the ceiling for the daddy long legs, wiggle them around for the spider (arms as well!) and cross them for the grasshopper.
“I’m going to change my nappy
I’d better make it snappy
There’s a whiff around here that’s getting rather strong
I’m going to change my nappy
To keep my mummy happy
Before my little bottom really starts to pong!”
The nappy song is fantastic, Zara used to scream, wriggle and generally be a pain at nappy changing time, I don’t know why, she just seems to hate it and no matter what we do to distract her nappy times are usually a battle. This little song however does make nappy changing easier, now I can’t say we have a 100% improvement yet but we certainly have less battles and occasionally we now have laughter and giggles rather than tears and tantrums.
The other song that we have had fun with is the tooth brushing lion song, now Zara is still young and she used to be good for having her teeth cleaned but recently she has started objecting to it, I think mainly because of teething and sore gums bless her, but rather than turn it into a battleground we now sing the lion song whilst she is in the bath and try to make tooth brushing more about fun.
The Tooth Brushing Lion.
For this song, ask your child to pretend to be a scary lion, growling and showing her sharp teeth. Pretend to be a bit scared of brushing and ask her to give a big load ‘ROAR’! If you manage to brush for the whole song you will have brushed for a minute and a half!
“Here’s a scary lion his mouth is open wide
I’m a bit scared to put my toothbrush inside
I’ll peek inside and see that he’s got sharper teeth than me
I hope this hungry lion doesn’t eat me for his tea.”
There are ten tracks in all on the CD covering situations from eating, putting on shoes, getting in the buggy, tidying up, brushing teeth to nappy time and they are all short, catchy little tunes that you will find yourself singing. I personally think it is a great idea and look forward to trying out the rest of the songs with my little diva, though hopefully we aren’t going to have battles with everything over the next couple of years!
The CD costs £9.99 and can be ordered from the Tunes 4 Toddler Tantrums website here http://www.tunes4toddlertantrums.co.uk/index.php  Pop across and check out their website for more information J