Hi Everyone; It’s Kara from Innocent Charms Chats, doing a guest review for the lovely Sonia. I was lucky enough to be sent MaByLand Trek Snuggle Carrier to review and test with my little Addison.

MaByLand, was set up by Sheena when she was pregnant with her 1st child, she since has 2 little ones 18 mths apart and sells a variety of baby goods, including Baby Carriers/Changing Bags/Baby Towels and Much More.

We had tried Baby Wearing with Addison when she was much smaller and she did seem to enjoy it, since getting older she has become increasingly nosey and wants to see the outside world which she can just not do so well always in a pushchair so I was over the moon when I got sent the Baby Carrier. 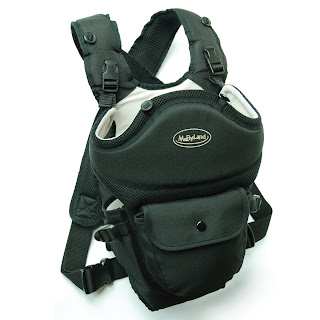 A little info about the Carrier –
“Similar in design to the Award Winning Trek Carrier, we wanted to keep the aspects of the carrier that parents’ LOVE, and instead “polish” the existing design.  The Snuggle Carrier is still as lightweight, easy to put on and comfortable as ever to wear. It also features the same high headrest that offers full neck and head support, as well as being well padded throughout for baby’s comfort and safety. 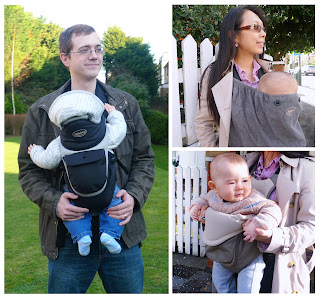 The Trek Snuggle Carrier is also a front facing, two position carrier, the main difference being that it features a large front pocket that holds a super soft terry cotton blanket inside. The blanket can be easily attached to the outside of the carrier and used to snuggle baby up, leaving them less exposed.”

I must say it was the fact that it came with a blanket that straight away sold it to me, now Addison is on the top end of the weight scale so I was unsure how well the carrier would work for us, but I am pleased to say we used it for over 2 hrs around The Baby Show last week and she was happy as larry. I did not experience much back pain at all and found it so much nicer than to just carry her which is what I normally end up doing. She seemed comfortable in the carrier, she could kick and jump around but safely. I struggled a little getting her in on my own and had to have hubby’s assistance but I think this is more due to Addison being so into everything around her and me not having much practise.

We then went on to use around Ikea, which was quite chilly, so i nipped out the blanket from its handy front pocket and it worked a treat, I love the fact this has a blanket, I haven’t seen another model that does and to me living in England this is a big pro.
I can honestly say the MaByLand Carrier shall be staying in the cupboard once Addison can no longer fit in it so I can use it with the next baby when it comes along, I can’t wait to put it to the test as it has extra support so it can be used facing parent from Newborn. I only wish I had had this when Addison had been born as she was only ever happy against Mummy and this would have saved some arm ache and given me hands and time to perform everyday tasks.

Thank you so much to Kara for reviewing this for me, It sounds like a fab baby carrier. I’m hoping I get to try it out is and when I have another 😉

You can buy the MaByland Trek Snuggle Carrier for just £59.99