Hi, It’s Dawnie Brown here, Sonia’s sister and also guest reviewer 🙂 You can also find me over my personal blog Knees Up Mother Brown (Excuse the shameless plug for my own blog 😉 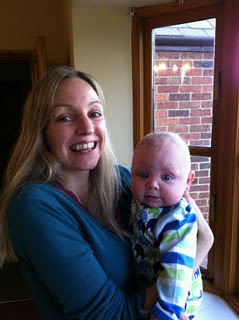 I’ve been asked to do a review of some Organic Cheek Rub for Teething which has been kindly sent to us by Organic Monkey. 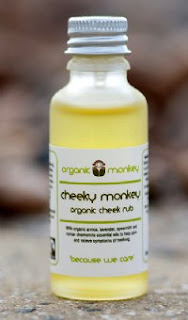 We all know how unpleasant the whole teething process is, cranky little monkeys and sleepless nights all round. We have developed an organic cheek rub made up of a soothing blend of 100% organic ingredients combining Arnica, Sweet Almond, olive and Sunflower oils with organic Roman Chamomile, Lavender and Spearmint essential oils to help calm and relieve.

Recently we have been having a lot of teething trouble with Oscar, at 8 months old his top 2 teeth are looking like they will be arriving shortly and he has certainly been letting us know about it. We’ve had drool, sore cheeks,sniffles, upset tummy, temperatures and a very miserable baby. It’s fair to say that everything has been a bit of a nightmare with him and at some points I’ve been up 3 times a night with him! I really really hate teething with a passion!

I’m one of those people that will pretty much try anything that might help to relieve some of the symptoms and if a product is natural and organic then it’s always an added bonus. Especially as with his sensitive skin I have to be really careful what we use otherwise it brings out his ezcema.

I admit I’ve still been using Nurofen and Calpol with Oscar throughout his teething episodes but I’ve also been using the cheek rub on his sore cheeks and it does seem to have a calming and soothing effect on him. I’ve been putting it on before I put him down for naps and before bedtime and as well as smelling lovely it really does seem to help. I can’t say whether it helps with pain relief but I can say it takes the redness out of his cheeks and he seems to like it so it gets a thumbs up from us 🙂

The teething rub sells for £7.50 on the Organic Monkey website for a 30ml bottle which sounds quite expensive but with the tiny amount that you use I’m expecting the bottle to last for ages (probably until he has finished teething) as we’ve been using it for a couple of weeks now and hardly used any of it 🙂