Review
I was recently sent the Snowball microphone from Blue Microphones to try out – we are having such fun with it :O)
﻿The Snowball is a simple plug and play USB microphone with an attractive retro design and professional quality recording capabilities. Compatible with the iPad and iPad 2, the Snowball features a dual capsule design and unique three-pattern switch (cardioid, cardioid with -10dB pad and omnidirectional) for recording sounds with equal quality from any direction, the Snowball can handle everything from soft vocals to the loudest garage band. 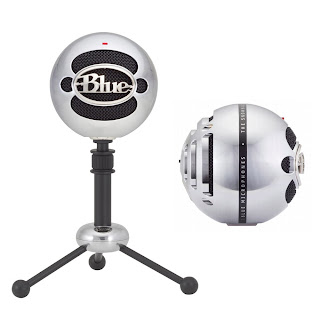 I have to be completely honest with you and say this is the FIRST microphone I have ever used on a PC! How crazy is that? I’ve had a PC for 13 years now LOL and have never once used a microphone!!
On receiving the microphone I was quite surprised at how big it is but it is really funky! It looks rather cool sat on my desk! ;O) I hate installing hardware which need drivers, Cd’s and instructions so was really pleased when all I need to do was plug the Snowball in! It really is as simple as that! Plug & Play!!
So the first thing I did once set up was play around with speech recognition on the PC and had great fun telling IE where I wanted to go next… Say Twitter and it opens Twitter!!! I could get very lazy here ;O)
Secondly I opened Skype (which I use as an instant messenger usually) and called my OH at work!! OMG I was sat at my desk chattering away to my OH through my PC!! I realise I look quite sad writing this but it is the first time I have ever used a mic so go easy on me OK!!! Anyway my OH said whilst chatting that he had never heard anyone sound so clear while chatting – and he chats alot though Skype!
My eldest son who is 14 is a bit of a performer so he is kind of over the moon that he has now got a microphone! He usually sings into the webcam and uploads onto YouTube but the microphone is much much better at picking up sound and he sounds FAB – I have to say that I am his Mother! No but he does! ;O)
So we are very very please with the Snowball Microphone – I guess it will migrate into my son’s bedroom and I won’t be able to voice command to view the web but hey ho! You never know one day he might be a star so it will have been worth it.
What the website says –

Finally, a USB mic that’s not only easy to use, but sounds as good on your desktop as it does in a professional recording studio. Meet the Snowball; the world’s first professional USB mic.
Whether you’re recording a guitar at your kitchen table or a complete band in the studio, the Snowball can capture it with detail unheard of before in a USB mic.

Blue Microphones is very excited to announce that, with the new iOS 4.3 update, Apple’s camera connection kit now allows the Snowball and Snowflake USB mics to be used on iPad! Now you can get Blue’s studio-quality audio on your iPad with any recording app, including FiRe, GarageBand, Blue FiRe and more!

Yes! You can use Snowball with iPad!

﻿I found the Snowball Microphone in the Apple Store for £89.95

Guest Post – What to do when your kids fight ALL the time?

Missinglettr
A walk around the local park with my youngest this

Out for a walk with the family this afternoon. Do