When I had my son back in 1987 baby-led weaning wasn’t heard of, neither were the 6-month weaning guidelines either for that matter. So when he got to 4 months off we went to get some baby rice to start weaning him. To be fair he did quite like food (he still does now though) and weaning wasn’t too bad. He was soon onto jars of food (making your own purees wasn’t really done back then). Lumpy food was next on the menu and I remember giving him these awful powdered meals but he would take great delight in using his hands so I suppose was doing his own version of BLW without me even knowing. It was a similar story when I had my daughter in 1990 – still no mention of BLW. The only difference this time was that I got a very fussy eater. 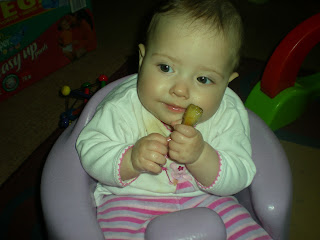 Move on 16 years and I came to have another baby girl. I was spending quite a bit of time on baby forums and one in particular (www.hitched.co.uk) there was lots of chat about BLW. So I found out a bit about it and thought I would much prefer that way of weaning her. So when she was 6 months I offered her a baby rice cake and some cooked veg. She seemed ok but I wasn’t very confident with BLW so I did give her some freshly made purees as well, going very slowly and only giving her one flavour at a time. She too is now a very fussy eater and I wonder if it’s because I didn’t keep up with the BLW or not offering her a bigger variety of foods that has caused this fussiness. Hopefully as she gets older her taste for different things will improve. 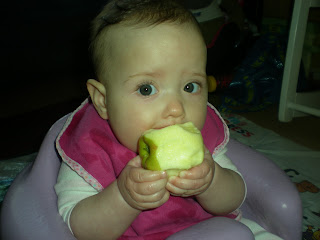 In 2009 I had another baby girl and this time I knew all about BLW (plus heaps more thanks to my wonderful Hitchers). I bought Gill Rapley’s book Baby-Led Weaning Helping Your Baby To Love Good Food and the process sounded so simple but I also loved the fact that my baby was in control of what she ate. She was doing that already when she was breastfeeding so why not carry it on with food? 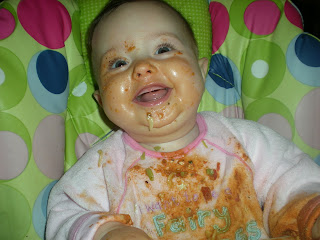 By about 5 months she started taking an interest in what we were eating, watching us, following the food to our mouths etc. Then one day she was sat on my lap and I was eating a sandwich. She reached out for it, grabbed the crust and rammed it into her mouth. I guess she was ready for food. She was 2 weeks away from being 6 months so I took her lead and let her have some food. She sat in her Bumbo and I put a few bits of cooked veg, rice cake and fruit on her tray. She was very selective and picked each piece up, tasted it then dropped it. I realised she was getting used to different flavours and textures so left her to it. After a few days like this she eventually bit pieces off the food, played with it in her mouth then out it fell. This went on for another week or two until I was changing her nappy one-day when I noticed bits of food. She was finally eating some of the food. I knew there was no rush and her breastmilk was providing all her calories and nutrients. This was the experimenting with food stage of BLW. From then on she didn’t look back and was happily eating anything we gave her, from rice cakes and cooked veg to large pieces of steak & whole apples. While out having a family meal one day she spent about 30 minutes gumming a corn on the cob, much to the amusement of the other diners. BLW has made our lives so much easier. No worrying about taking food with us when we go out because I know she will eat what we are having. I haven’t had to spend hours pureeing, then freezing, defrosting and re-heating vegetables and other foods. She simply has the same as us or if that’s really not suitable i.e. too hot a curry then she has the same as her sister. 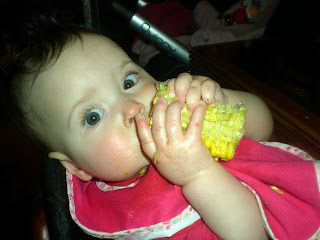 BLW has been a fun exciting and very easy way of weaning my little girl plus it has the benefits of letting her be in control and helping to prevent childhood obesity. I would recommend it to any mum and I do at every opportunity I get. 🙂

Guest Post – What to do when your kids fight ALL the time?

Flying With A Baby by Clare

Breastfeeding from baby and beyond

Missinglettr
AD|GIFTED: How beautiful is this silver locket tha