Bugs is 6.5 months old now and he has never had a dummy, I tried to give him one in the first few weeks just to try and get him to settle more as he fed constantly from 5pm until 3-4am most days but he would never take one! He started sucking his thumb though and he has really bad eczema on his hands which is made worse by constantly sucking his thumb, I have been putting socks on his hands at night because they have been so sore, bleeding and cracked. This made his hands a little better but he wouldn’t settle because he didn’t have anything to suck so I thought I’d try a dummy again and well as you can see he likes it LOL! 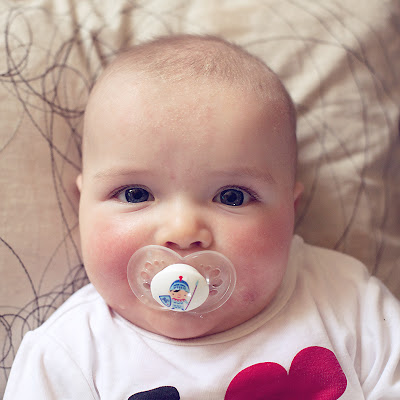 I know a lot of people don’t like dummies, I honestly don’t mind them, my other 2 had them and I never had a problem getting them to stop using them and I’d rather have a happy, settled baby who isn’t constantly in pain with bad eczema :O)
What do you think? Are you for or against?
﻿
﻿

I ran a Half Marathon!